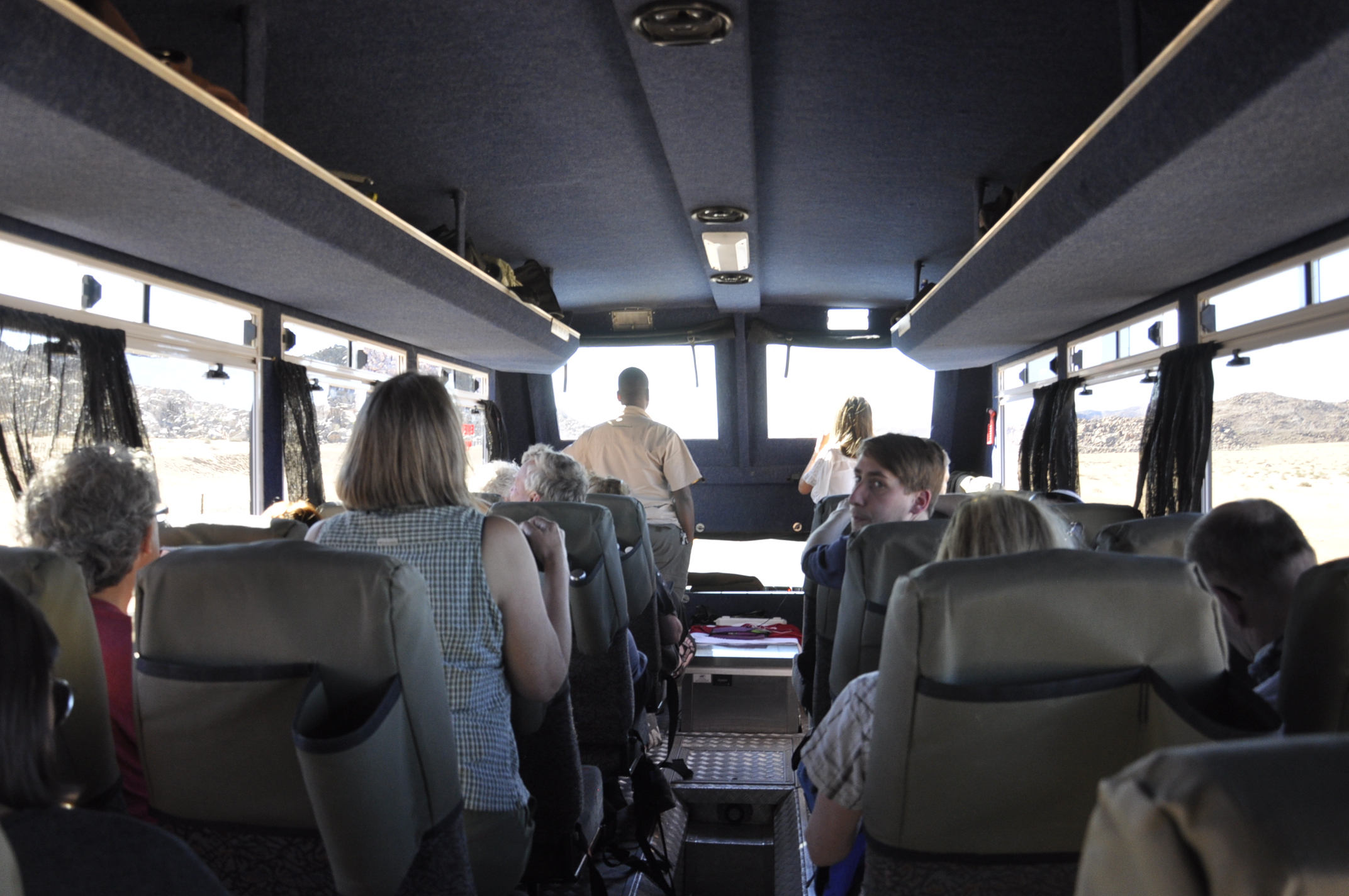 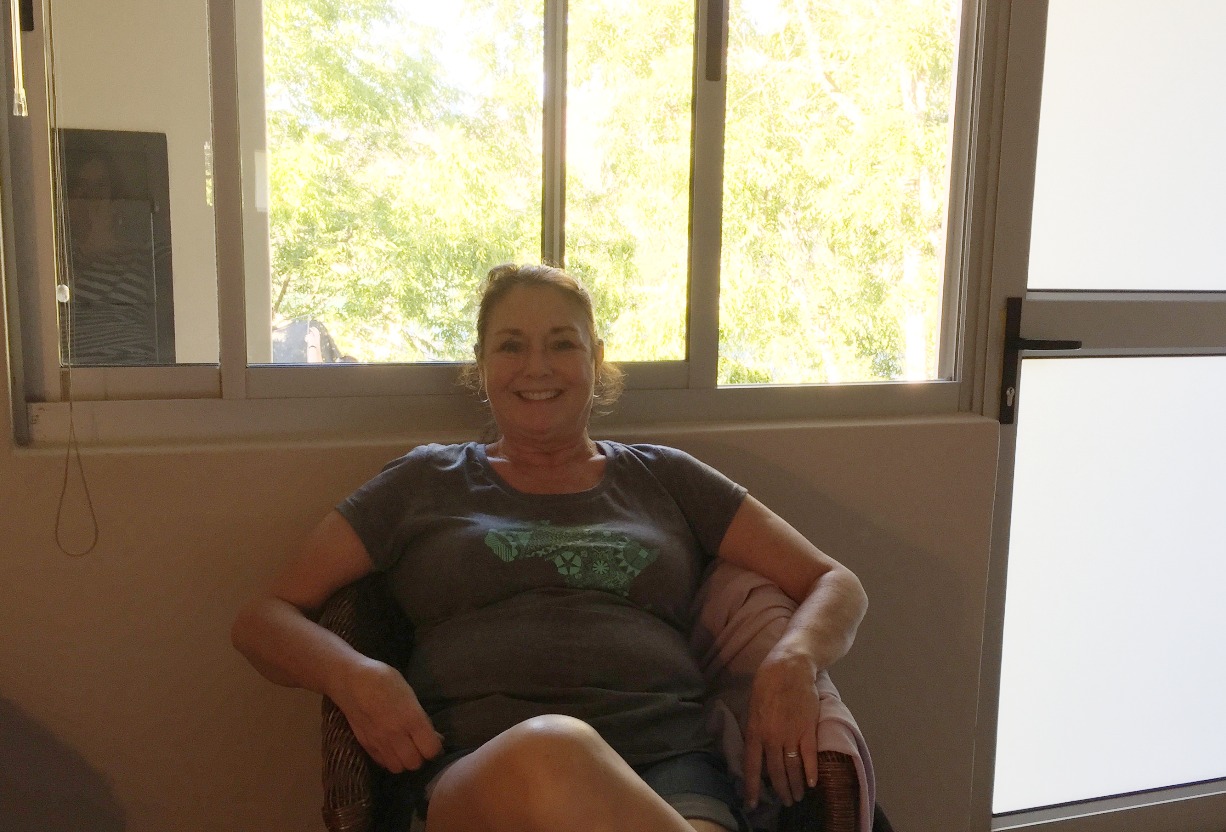 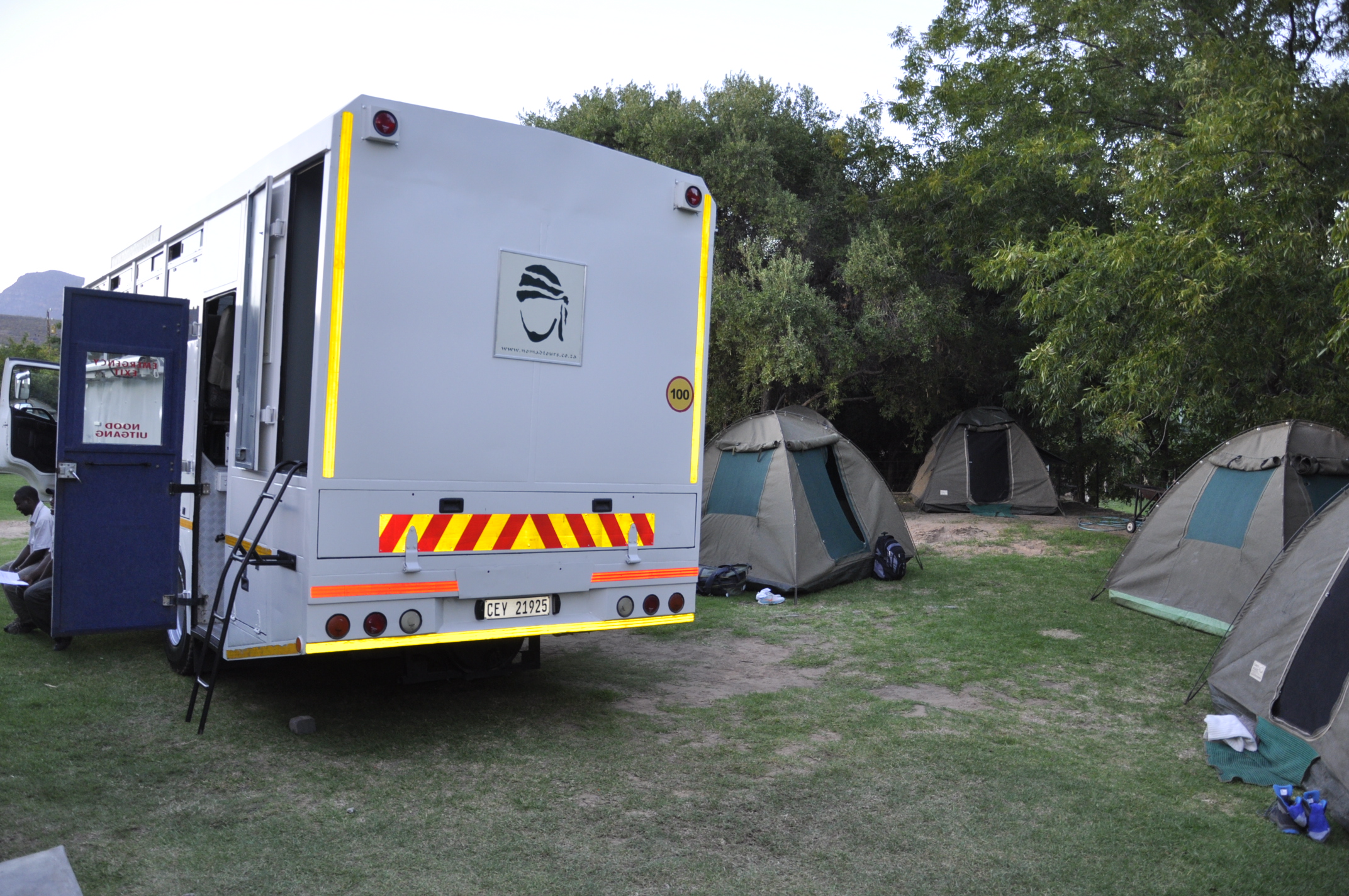 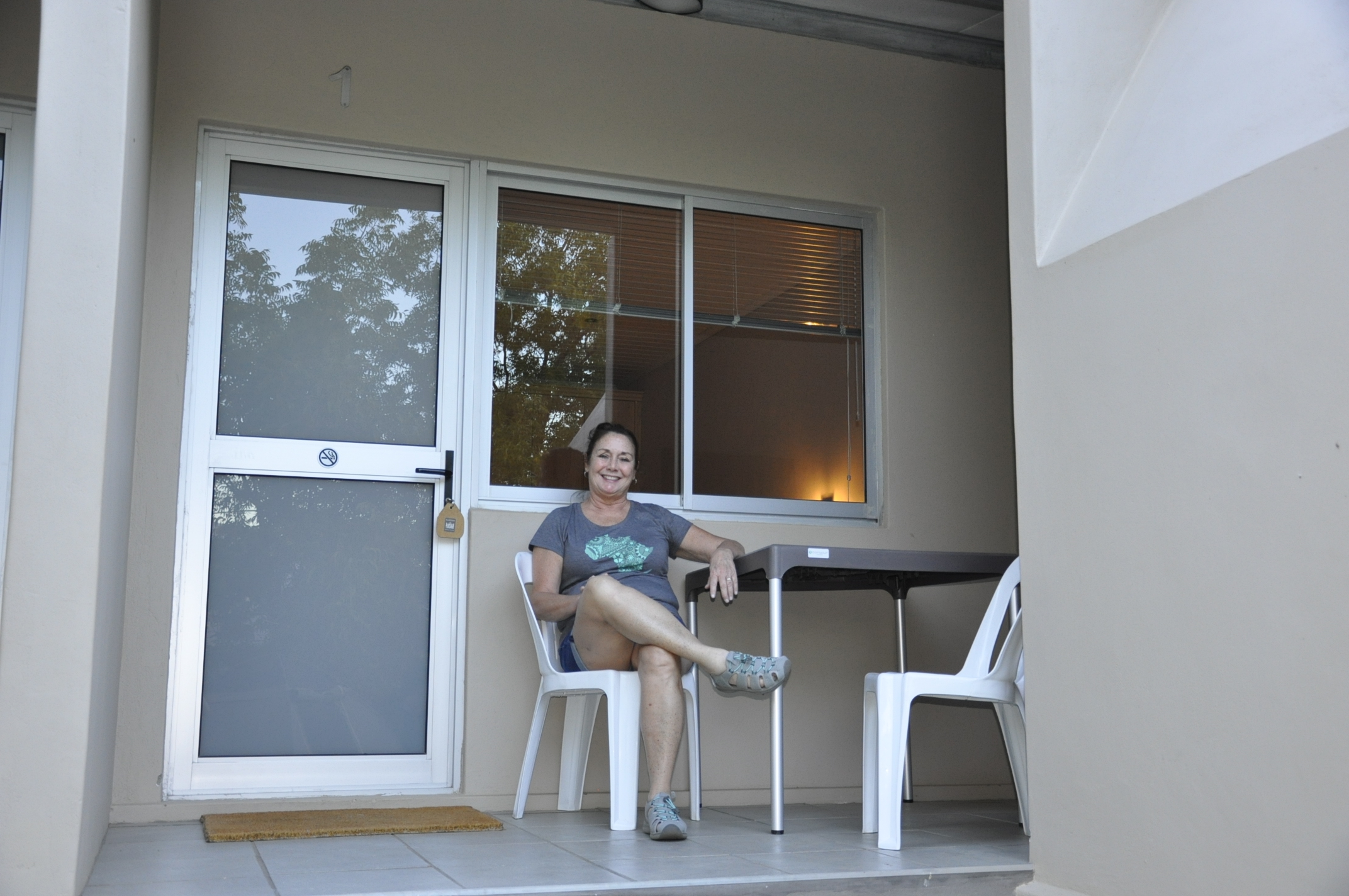 Jen and I cleared out of John and Joyce Galloway’s apartment early, leaving 3 suitcases behind and took an Uber to 39 Castle Street, Nomad Africa’s Cape Town tour office. It was pretty much mayhem there as several tours were leaving at the same time. Traveling more or less parallel to us, in our truck named Chuck, was a group of tent campers in a truck called Amy. We never heard why the trucks were named what they were, but we soon came to think of Chuck as special place. And not necessarily a special place in a good way!

We had signed up for an “accommodated tour”, which meant we would be in a hotel every night. The campers were in the same location as we were about half of the time, camping on the grounds of the hotel or game lodge we were at, and other times we didn’t see them for several days at a time, either because they were seeing slightly different things than us, or because the hotel we were booked at didn’t allow camping.

We were finally all checked in, our travel insurance verified and our bags stowed in assigned lockers inside Chuck. There we sat, complete strangers, and were introduced to our crew of three, Gift, Almon and Joseph.

All three guides were from Zimbabwe, or Zim, and that was no surprise to me. I had already met many people from Zim prior to our trip working in South Africa. Since Zim was a British colony, English is taught in school and is spoken well and widely in their country. The standard of education in Zim was better than most places in Africa, so the people are ambitious and industrious. There are serious problems in Zimbabwe now, due to corruption and the long rule of Robert Mugabe, so many people live and work elsewhere. There simply is no cash in Zim and there is no way to buy much of anything.

Our head guide was Gift, so named because his parents decided he was a gift from God. Gift’s father had a dog named I’m Tired of You. Gift has worked for Nomad for six years and led tours for a competitor for 11 years before that. Gift is 46, married and has two sons, 21 and 14. He plans on retiring in two years and opening a preschool with his wife.

Our driver and captain was Almon, father of three little kids who live with their grandma in Johanesberg, or as everyone calls it, Joberg. He only sees his kids every couple of weeks. He’s 33 and could drive our truck/bus over the roughest road I’ve ever been on for hours and hours at a time.

Our third crew member was Joseph, all around helper, navigator, and cook. He has two small children who live in Cape Town. Joseph was an absolute sweetheart and could whip up lunch for 20 in about 15 minutes.

We later learned that most Nomad tours are typically only allocated two staff, but because our tour generally attracts older clients who need more help, we got three. I honestly can’t imagine doing it with less than three crew, but we did have a number of retirees so I guess they match it up right.

Generally, everyone on the tour could carry their own bags and help out. I had some trouble, for example carrying both of our bags and getting on and off the truck because of my knees, so perhaps five times the whole trip someone else helped me with our bags.

So anyhow, after our introduction and first set of plans, we set off to see a view of Table Mountain and Robben Island, where Nelson Mandela was imprisoned for 18 of his 26-year sentence. Too bad about the fog that day because we could see neither Table Mountain or the island.

We then stopped at the first of our many stops at a grocery store. We all had to buy our own drinking water and snacks. The crew bought the food they would be cooking for us for the next few days. We also found our first of dozens of different toilets. Because we were in such a dry place our crew insisted that we drink a lot of water, but since our truck, named Chuck, didn’t have toilets (or air conditioning, by the way) we had to stop often. Some of the stops included “proper bathrooms” and many others were “adventure bathrooms” or “bushy bushy”, which meant finding a little cover behind a bush. We got pretty good at this maneuver.

We stopped for a wine tasting at a beautiful winery in Paarl, near Franschhoek, called Spice Route. We spent about an hour tasting wine and chocolate, shopping in their gift shops, and walking around the grounds of the winery admiring the stunning mountain and valley views in the distance.

We drove on through some beautiful scenery and once we were quite away along, we stopped for lunch. Gift explained how we would help the crew to prepare meals. Two or so people would help with a specific kitchen prep job like making salad. Others would hoist the heavy metal tables out of the bottom of the truck. Still more wrangled the camp chairs into a horseshoe shape so we could talk and also listen to Gift, Almon and Joseph tell stories and hear about our next day’s itinerary.

This first day Gift asked us to tell him and the group why we were there. What was the reason we had chosen this tour in this place with Nomad? For Louise from Montreal it was to see elephants. For Jenni, it was to see Victoria Falls. For me it was to see big animals and especially large cats. Everyone had a reason, including Peter from Australia who would have preferred to travel to China, but his wife Alison insisted on Africa.

Our travel companions were Rob and Karen from New Hampshire, Peter and Allison from Australia, Bruce from California, Mattias from Germany, Boris from Ukraine, Sven from Belgium and his girlfriend, Diana from Columbia, Natalia and Rosaria from Argentina, Jaye from Brazil, Louise and Nikolas from Montreal, and Barry and Margarite from New Zealand.

There were a few more hours riding in the truck before we stopped for the night at a beautiful farm growing oranges and rooibos tea. The family who ran the place had recently extended their farm to include 10 or 15 hotel rooms and space for campers. There was a pool with mountain views and a large dining area. We thoroughly enjoyed the space, our room and the fine weather. We killed a strangely large spider in the shower that night.

Dinner was a braai (South African BBQ) with veggies and potatoes. We relaxed in the room and watched TV before bed, hoping all our accommodations would be so nice, minus the spider, of course.

Get REI's Deal of the Day